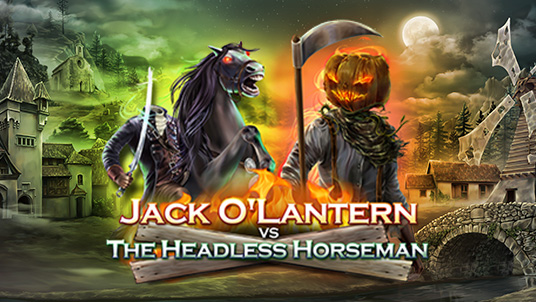 Jack O'Lantern and The Headless Horseman are spreading chaos

Make sure to keep a steady hand while spinning!

Through the fog, darkness and silence Redrake Gaming presents “Jack O’Lantern” and “The Headless Horseman”, the two main characters in a new videoslot with 5x3 reels and 30 paylines.

This videoslot has a wide range of prizes while its gripping nature will keep you on edge the whole time. From the first spin you can appreciate its meticulous design, the high-quality animations which are different for each character, and the grand variety of features that will hook you with every spin.

There is an explosive cocktail of different features in this game. You will be able to watch the reels shake, which lets the “Headless Horseman” in by allowing him to expand over them. You can view the “Jack O’Lantern” symbol catching fire and randomly burning other symbols, which transforms them into Jack symbols. Meanwhile, you can also see a fight between “Jack” and “The Headless Horseman”, which will trigger the minigame “Fight of the Shadows”, where you could earn 10, 20 and 30 free spins.

Due to the new and special features, along with the amazing animations, this videoslot is one of our most popular titles yet.