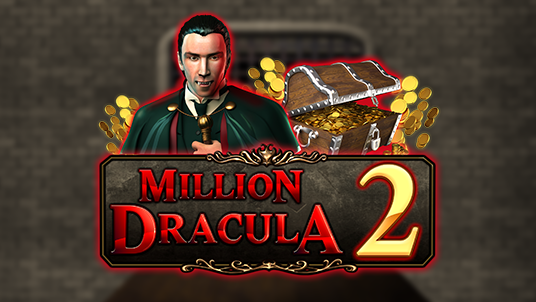 To enter Dracula’s castle, players will need to gradually lift the bars as they obtain wins.  The higher the bars are lifted, the more rows will be revealed, starting with 3x6 reels and reaching a maximum of 6x10. At this point, the grid will go back down again to show just the three initial rows and begin lifting again as wins are obtained.
In this video slot, the Dracula symbol is Wild and replaces all other symbols, except the Bonus symbol.
The Dracula’s Treasure minigame will be launched once the accumulator is filled with the treasure chests that will appear as the rows are revealed. The minigame begins with 4 holy waters. Each holy water grants a row with direct wins or more holy waters that allow you to keep playing. The minigame ends when the holy waters run out or when you make it to the final row, where you obtain the treasure.
The cups with the Bonus symbol will launch the free spins feature and change the setting to Dracula’s lair.  3 cups grant 8 free spins, 4 cups grant 12 free spins and both 5 and 6 cups grant 16 free spins. During this feature, 4 rows will be revealed automatically while the rest will remain hidden behind a mysterious curtain that will be lifted two rows at a time as the player obtains wins.
A video slot where the excitement builds as more rows are revealed.
'Million Dracula 2' is released today, 23 December, although it was also recently launched exclusively with several operators, so there are already many players enjoying this fantastic slot game and generating great profits for partners of Red Rake Gaming. As with all our other slot games, it also works with the Red Rake Gaming tournament tool, to offer gamers even more excitement and gaming options.

Red Rake Tech SL is commited with the best IT security principles.