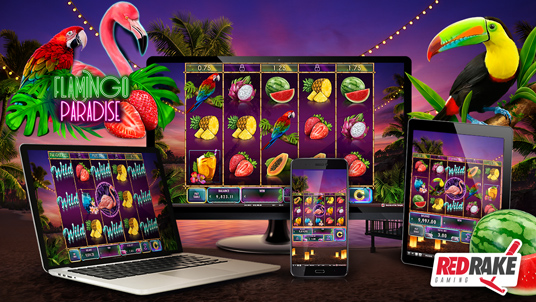 Red Rake Gaming, the leading content provider in the sector, has today released a new 5x3 reel video slot with 50 paylines that is bursting with fun thanks to its many different features.

A spectacular Caribbean scene that invites players to relax and enjoy a cocktail while they obtain endless wins.
The main characteristic of Flamingo Paradise is the upper prize bar, where you'll find many different features that are activated by the flamingo symbol (one or more can be activated in the same spin):

- Flamingo Spins: in this feature the flamingo symbol is Wild and grants 5 free spins, during which the wins that include the flamingo symbol in the payline will be increased by a random multiplier that is shown in the side bar (x2, x3, x4, x6, x10, x20, x40, x100). The multiplier bar will appear at the beginning of the feature and will disappear once the 5 free spins have finished.

o Flamingo Wild Respin: This will appear in the middle reel, occupying it entirely and making it WILD. It will then become fixed in place and launch a respin in the other reels.
o Exotic Wheel Minigame: in the “Exotic Wheel Minigame” you choose a colour (red or purple) and then the wheel will start spinning. If it stops on the colour that you chose, the corresponding multiplier will be added and you can keep playing up to a maximum of x100.
o Multipliers by the cost per line. Multipliers appear that will increase your win.

Finally, the moving WILD symbols may move up or down several times to add more Wild symbols, including a Flamingo symbol in its column.

As you have already seen, Flamingo Paradise is a comprehensive video slot brimming with features and music that will instantly transport you to paradise, while you enjoy gaining endless wins.

It was released today, 25 March, although it had already been released on 11 March exclusively with various operators and has been a huge success. This new slot game will also be available on the Red Rake Gaming tournaments tool, to add even more excitement.